California voters passed Proposition 215 in 1996, making the Golden State the first in the union to allow for the medical use of marijuana. Since then, 35 more states, the District of Columbia, Guam, Puerto Rico and U.S. Virgin Islands have enacted similar laws.

POST 2020 ELECTION UPDATE: As of Nov. 4 2020, voters in Mississippi and South Dakota approved a measure to regulate cannabis for medical use, bringing the total to 36 states and 4 territories.

POST 2020 ELECTION UPDATE: As of Nov. 4, 2020, voters in Arizona, Montana, New Jersey and South Dakota approved measures to regulate cannabis for adult-use.  This brings the total to 15 states and 3 territories.

Approved measures in 11 states allow use of "low THC, high cannabidiol (CBD)" products for medical reasons in limited situations or as a legal defense.  (See Table 2 below for more information). Low-THC programs are not counted as comprehensive medical marijuana programs. NCSL uses criteria similar to other organizations tracking this issue to determine if a program is "comprehensive": 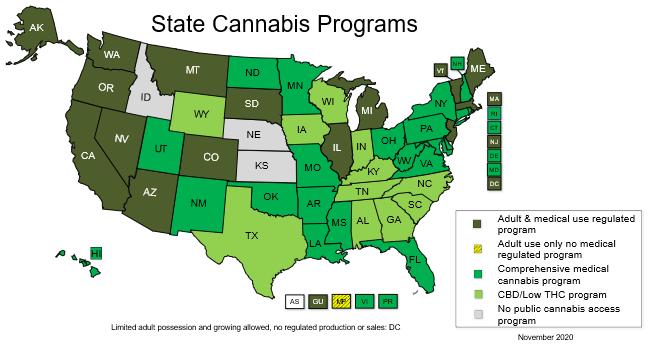 In response to California's Prop 215, the Institute of Medicine issued a report that examined potential therapeutic uses for marijuana. The report found that: "Scientific data indicate the potential therapeutic value of cannabinoid drugs, primarily THC, for pain relief, control of nausea and vomiting, and appetite stimulation; smoked marijuana, however, is a crude THC delivery system that also delivers harmful substances. The psychological effects of cannabinoids, such as anxiety reduction, sedation, and euphoria can influence their potential therapeutic value. Those effects are potentially undesirable for certain patients and situations and beneficial for others. In addition, psychological effects can complicate the interpretation of other aspects of the drug's effect."

Further studies have found that marijuana is effective in relieving some of the symptoms of HIV/AIDS, cancer, glaucoma, and multiple sclerosis.1

In early 2017, the National Academies of Sciences, Engineering, and Medicine released a report based on the review of over 10,000 scientific abstracts from marijuana health research. They also made 100 conclusions related to health and suggest ways to improve cannabis research.

At the federal level, marijuana remains classified as a Schedule I substance under the Controlled Substances Act, where Schedule I substances are considered to have a high potential for dependency and no accepted medical use, making distribution of marijuana a federal offense. In October of 2009, the Obama Administration sent a memo to federal prosecutors encouraging them not to prosecute people who distribute marijuana for medical purposes in accordance with state law.

In late August 2013, the U.S. Department of Justice announced an update to their marijuana enforcement policy. The statement read that while marijuana remains illegal federally, the USDOJ expects states like Colorado and Washington to create "strong, state-based enforcement efforts.... and will defer the right to challenge their legalization laws at this time." The department also reserves the right to challenge the states at any time they feel it's necessary.

More recently, in January 2018, former Attorney General Sessions issued a Marijuana Enforcement Memorandum that rescinded the Cole Memorandum, and allows federal prosecutors to decide how to prioritize enforcement of federal marijuana laws. Specifically, the Sessions memorandum directs U.S. Attorneys to “weigh all relevant considerations, including federal law enforcement priorities set by the Attorney General, the seriousness of the crime, the deterrent effect of criminal prosecution, and the cumulative impact of particular crimes on the community.” Text of the memo can be found here: https://www.justice.gov/opa/pr/justice-department-issues-memo-marijuana-enforcement

NCSL's policy on state cannabis laws can be found under Additional Resources below.

States with medical marijuana laws generally have some form of patient registry, which may provide some protection against arrest for possession up to a certain amount of marijuana for personal medicinal use.

Some of the most common policy questions regarding medical marijuana include how to regulate its recommendation, dispensing, and registration of approved patients. Some states and localities without dispensary regulation are experiencing a boom in new businesses, in hopes of being approved before presumably stricter regulations are made. Medical marijuana growers or dispensaries are often called "caregivers" and may be limited to a certain number of plants or products per patient. This issue may also be regulated on a local level, in addition to any state regulation.